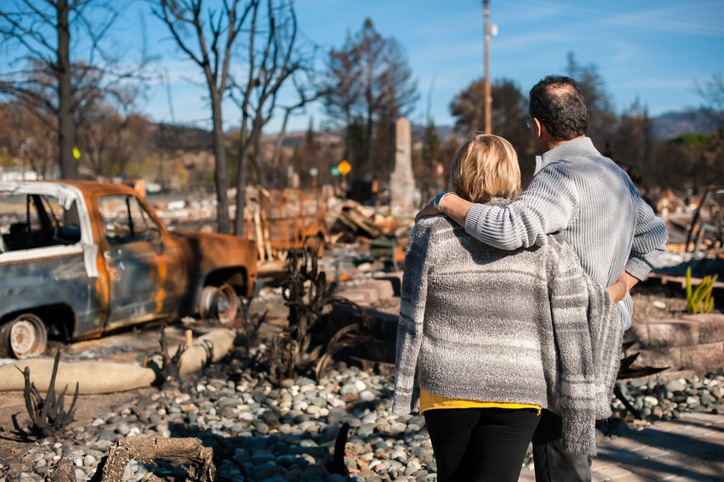 California’s wildfire season in 2018 set many records, with thousands of individual fires costing billions in property damage and more billions in firefighting costs. The fires raged so terribly in the north part of the state that a national disaster was declared. Wildfires have long been a part of California’s landscape, and homeowners know that home insurance is designed to provide financial security in case of property damage or loss. California’s home insurance rates have been influenced by the sharp uptick in wildfires, both in the amount of destruction they cause and the expenses involved in fighting them.

2018 California Wildfires by the Numbers

Hailed as the deadliest and most destructive wildfire season on record in the state of California, the 2018 season devastated lives across the state. Here is a look at some of the staggering numbers associated with the fires:

In one fire alone, the Camp Fire, 86 people lost their lives and 18,000 structures were destroyed. A combination of factors made the state more susceptible to fires, including atmospheric conditions, increases in natural fuel sources (dead trees and underbrush), and increased residential construction on borders between natural lands and urban areas.

Insurance companies across the nation have become more cautious when it comes to insuring homes in California. This is a direct result of the devastating 2018 wildfire season. Much of the concern comes from homes built in the wildland-urban interface, a term used to describe the zone between unoccupied natural land and developed areas. In California, approximately 43% of new homes have been constructed within this area since the 1990s, and in some areas, the figure reaches 80% of new home construction. Before homes were built, wildlands could burn without directly affecting homeowners and their residents; today, fires in the area can result in total destruction.

Some insurance industry analysts suggest that California is nearing a crisis, with fewer insurers taking on the risk of home insurance policies in the state and higher costs with less coverage dominating the landscape. Many homeowners have been unable to renew existing policies. When those same homeowners found policies to replace the non-renewals, they faced rate increases of 20-40% or more. California does have an insurance plan of last resort – known as the Fair Access to Insurance Requirements (FAIR) Plan, which makes homeowners insurance available to those who have been denied coverage at least three times by other insurers. Even though overall enrollment in the FAIR Plan has fallen by 5 percent, the number of policyholders with homes in the wildland-urban interface has increased.

The California homeowners’ insurance situation is troubling, at least for those property owners near fire-prone areas. Not all is hopeless, however; the state of California limits insurance rate increases by a maximum of 6.9%. Premiums for home insurance policies have not risen much, on average, but if claims from fire damage continue to skyrocket, it is inevitable that all homeowners will feel the pinch of higher insurance premiums. For now, those with properties in fire-prone areas continue to have difficulties finding appropriate insurance coverage, and when they do, they can expect premiums substantially above state averages. Rate hike caps and the FAIR Plan serve as stop-gap solutions to those who wish to protect their homes from losses incurred by wildfires. Despite these limited protections, some industry analysts indicate that the state may have another catastrophe on their hands – this time, an insurance nightmare for hundreds of thousands of property owners.

Don’t wait. Get your personalized offer within minutes.

Next Prev
Get a Quote Now